A Web Game For Designers, By A Designer

Black & White is the project I undertook for my undergraduate thesis, and I’ve included it here as a fond nod to the kind of work I was doing almost a decade ago. With the premise of  a world where designers are like gods, with powers to physically manipulate color, form and type in the world, the player takes on the role of a design detective on the trail of another “designer god” gone rogue, who has stolen the source of color in the world.I also incorporated elements of learning basic design principles in the game, so that while playing the main point-and-click adventure, small mini-games would pop up as part of the story progression introducing the player to basic graphic design and typography concepts.

For my thesis show, I created a website giving the game synopsis, information about key characters, and a promotional trailer, in addition to housing the game demo. Within the demo, players could freely interact with objects and people in the game environment (such as playing with the tv or jukebox), select through various dialogue options when talking to characters in order to find out more about the world, and play through the mini-games to move to the next level.

The opening screen of the website showing off the game trailer.

Instructions on how to play the demo.

The level that I created for the demo, showing our hero and a npc in conversation as he tries to gather clues.

In talking to other character, our hero is often given many dialogue options affecting gameplay. 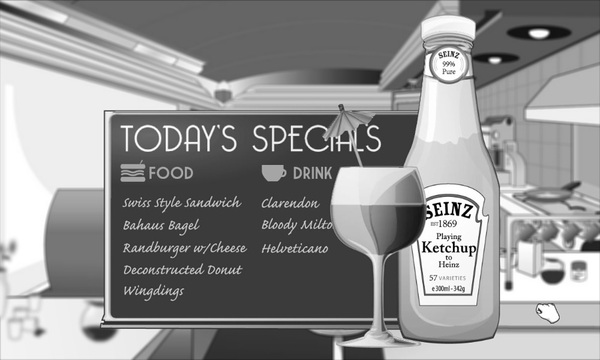 Clicking on in-game objects allows the player to look at them more closely and use them.