For our Basic Interaction Studio, we were given a brief around designing a digital intervention that sought to educate people about sustainability and encourage sustainable practices. Our team decided that we wanted to work with children between the ages of 7-12, as we hypothesized that it would be far more effective to educate children early in sustainable practices so that habits formed early would persist later in life.

We conducted observational studies, including a local visit to the Children’s Museum in Pittsburgh to study children’s engagement with the interactive exhibits, and expert interviews with researchers involved at the Museum and professors studying informal learning in kids. Identifying immersion through narrative creation and reward through progression as key insights from our observations of children at play, for an immersive, narrative driven game with the in game scoring system tied to real world tasks that would facilitate learning and understanding about sustainable practices.

Observing the kids play at the Children’s Museum.

By combining quests within the game with real world tasks,we tried to make engaging in sustainable practices fun and informative.  By helping an in-game character trying to revive his polluted, dying planet in the game by doing real-world activities that conserved energy and water and promoting the sharing and reuse of personal items, we hoped to reinforce sustainable habits in kids, while giving them incentives by immersing them within an engaging narrative that changed in real-time based on the child’s progress and actions. 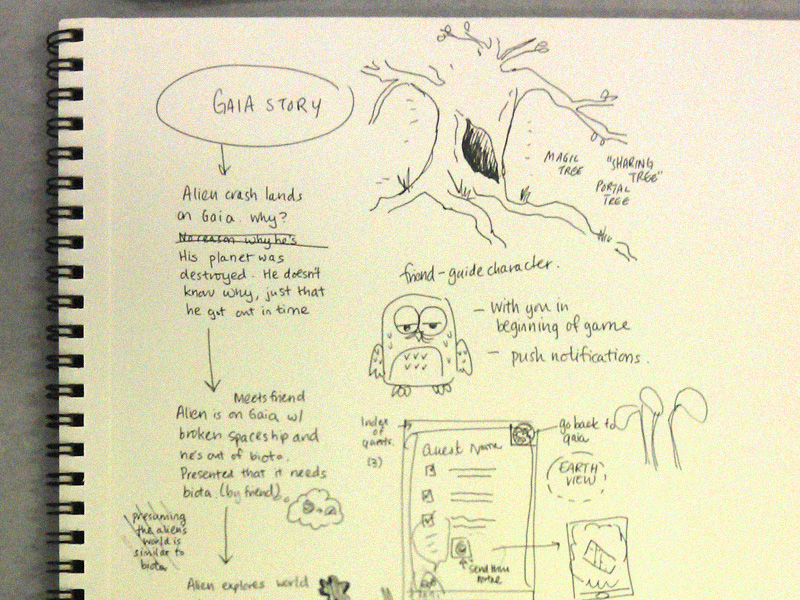 We developed personas and scenarios exploring several ways in which the key game mechanics would work, and went through several iterations of wire-framing and user interface style development before finally settling on a system of interaction and aesthetic that we felt worked. 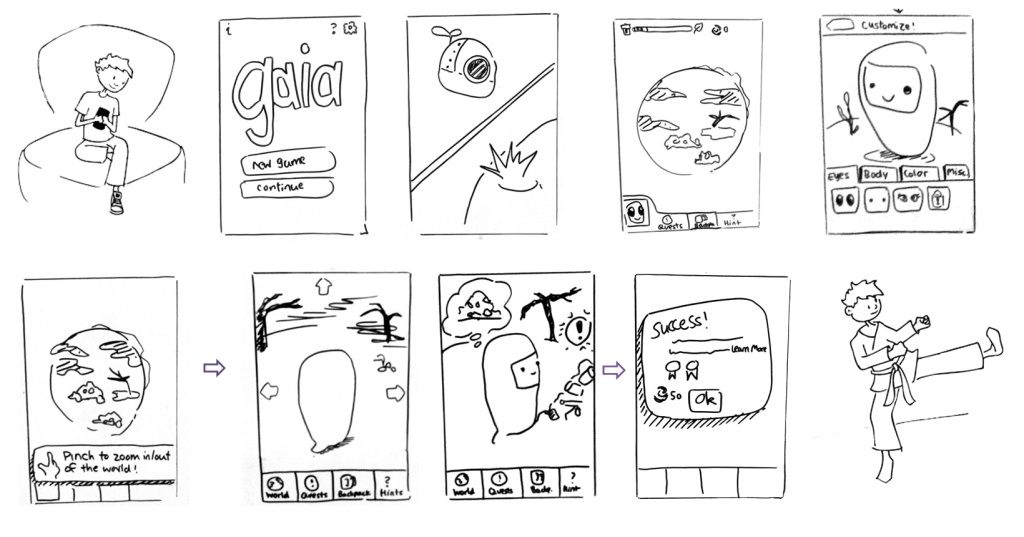 The final design of the game reflects a handcrafted, rustic, fun aesthetic that we were aiming inspired by the visual style popular video games such as Little Big Planet.The final demo showed off the opening cut-scene and a single level of the game showing the interactions between the in game characters and the world.

The cutscene shows how the player character crash lands on a planet, Urth, and meets an NPC, an owl, who tells him that the planet is slowly dying because of pollution, and gives the player daily and weekly quests like cleaning up after themselves, or taking rubbish out to be recycled. On the successful completion of each task in the real world, the player progresses in the game world, cleaning up Urth and unlocking repairs for their spaceship. 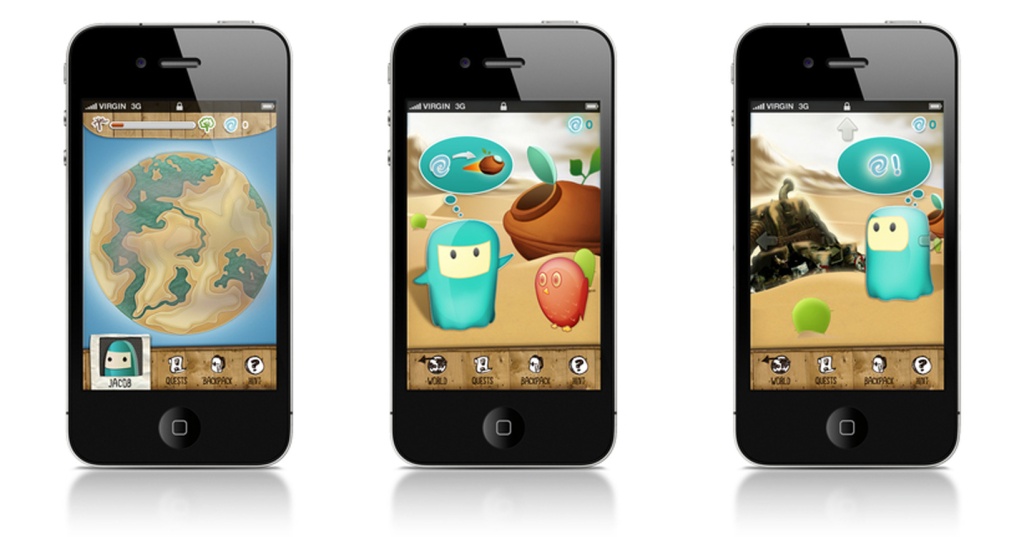 Screens from the application. 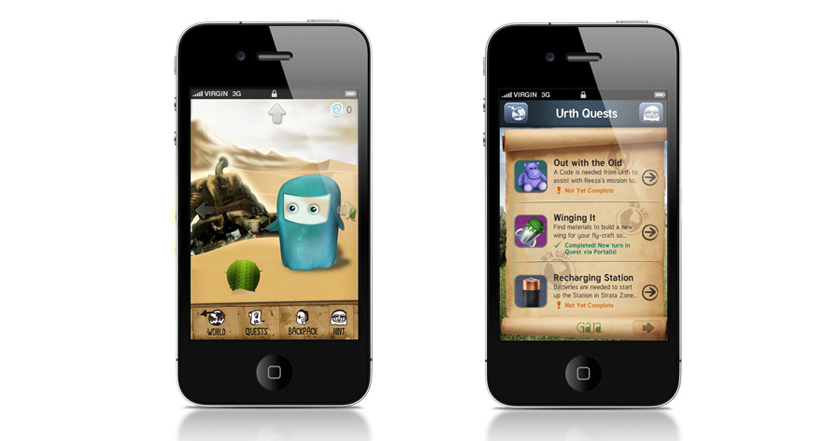 More screens from the application.

As children complete real world quests and see themselves progress within the game, the game then educates them about those practices and tries to build them into habits via repetition. We envision children visiting recycling sites, donating old clothes, etc and in return, receiving a QR code on a card that they can scan to progress in the game. As kids keep doing these tasks, we hope that by the time they near the finish of the game, they will have internalized and built sustainable habits to the extent that they will continue to live so for the rest of their lives. 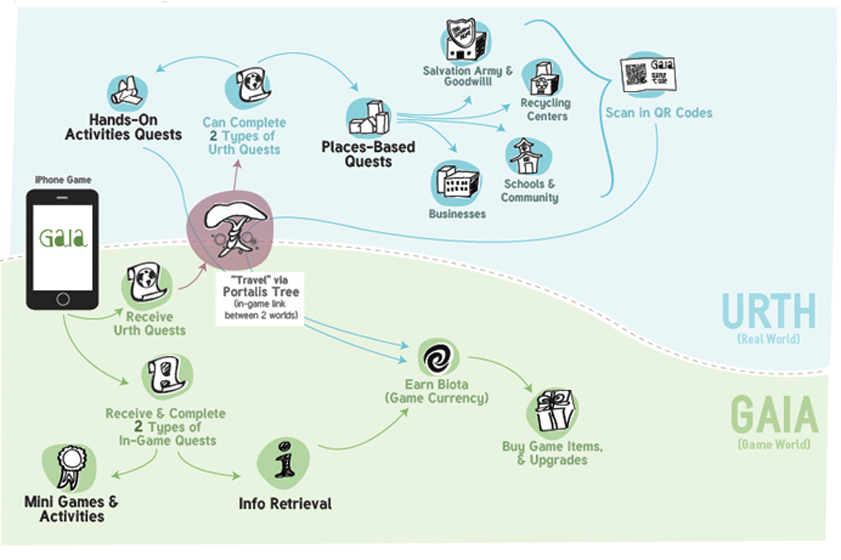 How characters progress in the game and real world tasks are tied to game tasks.